Article from Parenthèse published on 26 November 2021, in the Annual Conference category.

Each year at the Fédération des parents Conference, an award recognizing an educator whose work is particularly appreciated in his or her community is presented. The 2021 Conference also provided an opportunity to celebrate the 20th anniversary of the Association francophone des éducatrices et éducateurs de la petite enfance de la Colombie-Britannique. 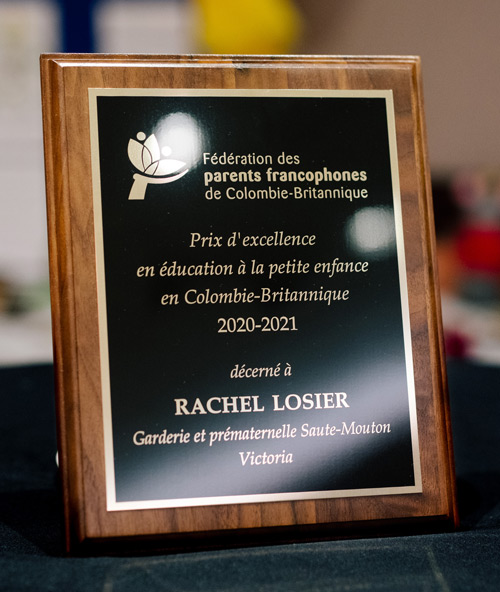 The prestigious Award for Excellence in Early Childhood Education in British Columbia was presented this year to Rachelle Losier from the Garderie et prématernelle Saute-Mouton in Victoria.

This distinction was presented virtually, during the opening night of the 2021 Conference, which took place in a hybrid format on November 19. 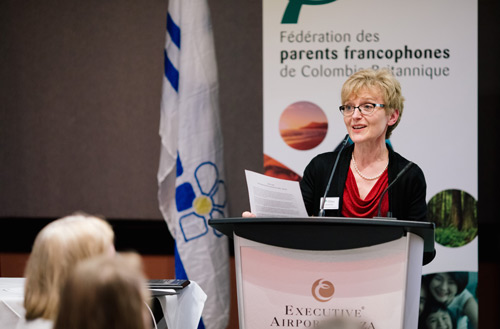 A loyal, stimulating, and inspiring educator, Rachelle has made her work with children and families a great and noble calling. Dynamic, positive, and generous with her time and herself, she’s always willing to communicate openly, support, guide, share, or motivate anyone who she feels needs a helping hand, both in her own child care centre and within B.C.’s community of educators and community partners.

She’s understood and incorporated the concept that close links established between educators and parents are conducive to the well-being of children and contribute to their harmonious and optimal development. No wonder she’s truly loved, not only by the parents and children, but also by her trusted team of educators, whom she encourages to better themselves, as she seeks to do herself. 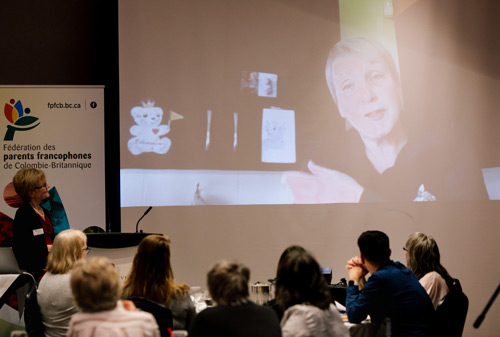 Always on the lookout for the latest developments in early childhood, Rachelle has been working for more than 22 years at the Garderie et prématernelle Saute-Mouton, where she first worked as an educator, then as the director of the centre, and then finally returned to something close to her heart: directly taking care of her “little lambs”, the infants and toddlers, as Coordinator of the ITE (Infant Toddler Education) program.

Warm congratulations to Rachelle! As she could not be present in Richmond on November 19, the award was presented to her at her centre in Victoria.

Celebration of the 20th Anniversary of the AFEEPECB

As this year marked the 20th anniversary of the Association francophone des éducatrices et éducateurs de la petite enfance de la Colombie-Britannique (AFEEPECB), the Fédération des parents wanted to celebrate this milestone on the opening night of the conference.

Several members of this organization – a long-standing partner with the Fédération des parents in several initiatives and projects – were present on this occasion. Among these guests were the current president of the Association, Karine Grand Maison, as well as two of her predecessors, Vincianne Pepin and Dianne Desbiaux, whose volunteer work was warmly praised.

This highlight of the conference brought to light the particular importance in the Francophone community of collaboration between educators and families to support the development of little ones on all levels, including the building of their identity.

We offer our congratulations and good wishes for continued success to the AFEEPECB!