Article from Parenthèse published on 25 November 2021, in the Annual Conference category.

Each year, the Fédération des parents francophones conference is an opportunity to recognize the dynamism and achievements of a parents’ association, as well as the contribution of parent volunteers from across the province.

Because the 2021 Conference took place in a hybrid format, the tradition was maintained but adapted to the context. So, the Parents’ Association of the Year Award was presented virtually, and the commitment of parents named “Volunteers of the Year” in their community was highlighted in a video clip.

Parents’ Association of the Year Award

During the opening night, which our members and partners could attend either in person or by videoconference, the Parents’ Association of the Year Award granted annually by the Commission nationale de parents francophones (CNPF) was presented. 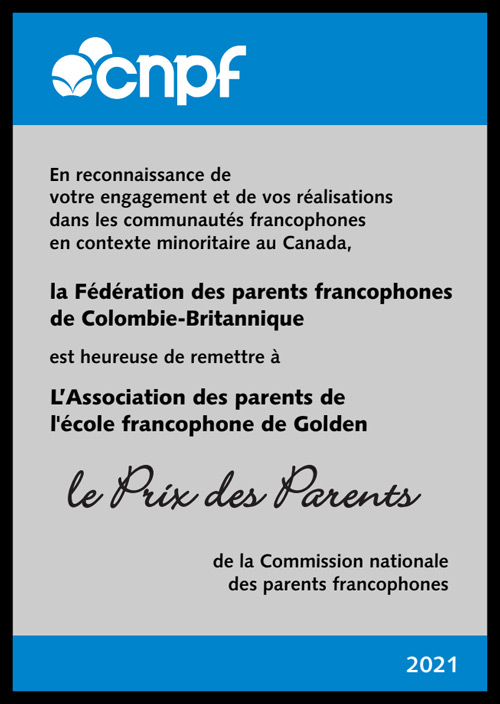 The 2020-2021 award was presented to l’Association des parents de l’école francophone de Golden (which is the APÉ of École La Confluence).

Set up just a few years ago by parents who wanted their children to have access to an education in French in their small town surrounded by mountains, this new association has already succeeded in making an important contribution to the vitality of the Francophonie in this part of the province by mobilizing parents around a project to create a school.

The group of parents that initially formed was actively involved in the process leading to the creation of a Francophone school, helping with the search for a building to house it, among other things. A few months before the school’s opening, this group founded a non-profit society and applied for a grant all within three weeks – in order to access the funding needed to acquire equipment for a playground. The parents then voluntarily set up the playground structures, and even involved the future students; all of this was completed just in time for the start of the school year at their brand new school.

Now that they have officially become a school parents’ association (APÉ), they have benefited since their early days from solid participation at monthly meetings, and soon achieved successful fundraising efforts and established proactive links with the municipality.

Despite its short existence, the APÉ has also implemented several innovative initiatives. These include requests for microfinancing to provide cultural activities for the benefit of the students; the presentation of a workshop on linguistic security for parents, in collaboration with the Conseil jeunesse francophone; and the creation of a parent volunteer school crossing guard program that’s unique within the Conseil scolaire francophone (CSF). 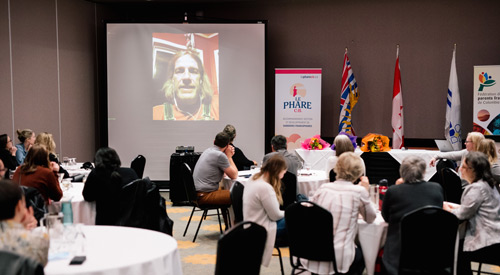 In addition, the association carried out an original writing project for Francophones and Francophiles in the community, both children and adults, which led to the publication of a special page in the local newspaper – and in this way they promoted Francophone presence and culture throughout the region.

Continuing a tradition, certificates of recognition honouring those who have been named “Parent Volunteer of the Year” in their community were displayed for the duration of the annual conference, so that participants who attended could see them.

However, given that several delegates attended the conference via Zoom, the Fédération des parents decided to highlight the dedication of these committed parents by creating a video clip that honours their contributions.

Congratulations and thanks to all these “Volunteers of the Year,” and we hope that their achievements can be celebrated in a special way in their respective communities!

We invite you to watch this video clip here: